These images and text document the many and varied World War II monuments scattered across the rugged landscape of Epirus, in northwestern Greece. They also provide evidence for the strong culture of ongoing World War II commemoration in the region. What the monuments commemorate ranges from the Hellenic Army's victory over Mussolini's forces in 1940 through the role of Greek women in the war, to the victims of Nazi atrocities, and even a Communist dominated resistance organization. The collection is part of a larger project that includes scholarship on some of the memorials, and interactive mapping of all of them which will enable users to geographically locate each one, learn its historical context, and contribute to discussion about it. 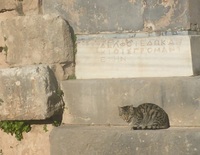 This book of hours came into Hollins University’s possession in January 1943 when Samuel McVitty donated it along with many other manuscripts, leaves, and rare books, which became the McVitty Collection. McVitty’s wife, Lucy, was a member of the Board of Trustees at Hollins, and McVitty donated them only a year and a half after his wife’s death, due to her interest and participation in the university. The book is now housed in the Special Collections of the Wyndham-Robertson Library.

"At the Cost of Truth": Hannah Lawrence Schieffelin and the Gradual Abolition Debate

Born in 1758 to a wealthy Quaker family in New York City, Hannah Lawrence Schieffelin was the daughter of the prominent merchant, John Lawrence. Yet, she hardly acted the role society expected of her: the supposed, meek, domestic eighteenth-century housewife was not the paragon she fit. Instead, Schieffelin sat at the center of the New York City Revolutionary literary scene – a poet, an ardent, loud patriot, and widely known socialite. Unlike the Quaker women who were central in Revolutionary literary Philadelphia, Schieffelin’s poetry has gone understudied. Over the past decade, Schieffelin’s peers, such as Hannah Griffitts and Milcah Martha Moore, have appeared in American literature anthologies, and even then, it is with the caveat that their voices were unique for the time.

These presumptions are untrue. Recent scholarship has shown the extent to which women used their poetry to speak widely and freely about the cultural and political agendas that dominated their lives. Schieffelin was one of these women as she wrote fervently about religion, British military presence in the colonies, and national legacy.

This digital project is not meant to be an edited collection of her poetry. Rather, it will explore a moment in her life when she participated in a poetic debate on gradual abolition. In this debate, Schieffelin enacts how early Americans, especially Quakers, grappled with the notion of nation building considering the human atrocities inherent in slavery. This project’s purpose is to introduce Schieffelin, the debate at hand, and how she is forced to reconsider how historical legacies are built.

Visitors to this exhibit will find a short biography, images of Schieffelin’s original poetry, and a timeline that details her participation in the debate. All navigation is accessible in the tabs to the right of the page.