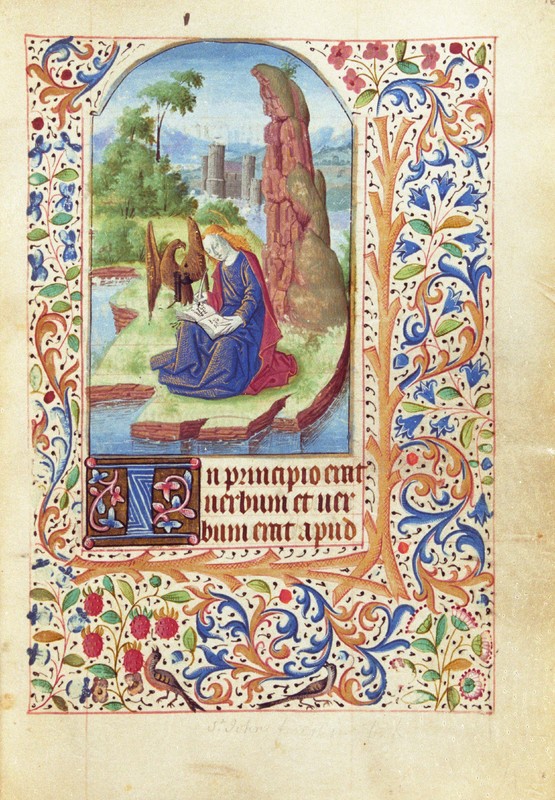 This miniature opens the Gospel Lessons by depicting John the Evangelist on the island of Patmos writing his Gospel. This image, like others in the book of hours, helped a reader to navigate her way through the text.  John begins the sequence, since rather than following the order of the first four books of the New Testament, the lessons highlight the readings for four major feast days of the liturgical year, starting with John’s text, “In principio erat  verbam,” “In the beginning was the word,” read on Christmas Day. In addition to the full-page miniature for John’s lesson, small illuminated initials featuring the Evangelist and his symbol mark each of the other Gospel excerpts.

The depiction of John seated in the landscape, intently writing and seemingly communing with his symbol, the eagle, follows a long tradition of author portraits in the book arts dating back to early medieval times.  There can be other ways of illustrating John’s Gospel, but an author portrait is a standard image, appearing, for example, in the closely related Morgan Library MS M. 2, fol. 15, or Morgan MS. M. 1093, fol. 13r.  What is distinctive about the McVitty Master’s scene is the rock formation that appears behind John.  Other artists, like the Master of the Geneva Latini and his workshop (as in Morgan MS. M. 1093), made use of geological props in their landscapes, but not with the same frequency or emphasis as the McVitty Master.  Seven of the miniatures in the McVitty Hours include freestanding rocks, and in five of them, complex, faceted outcrops dominate the composition.  These imaginative red-brown structures bear little resemblance to the white limestone of the Parisian basin and seem to be the artist’s signature device through which he emphasized key protagonists and actions in his miniatures.  The rock in John’s scene is fairly contained, but tilts slightly at the top to frame the Evangelist.  Here as in other outdoor scenes, the McVitty Master successfully evokes an expansive landscape setting studded with trees and a deep, atmospheric background.

The author portrait of John is also characteristic of the approach the McVitty Master took to the human figure, with its slender, doll-like form, pale, ovoid face and flaxen hair.  Here as elsewhere in the manuscript, the garments are etched with a fine web of gold paint.