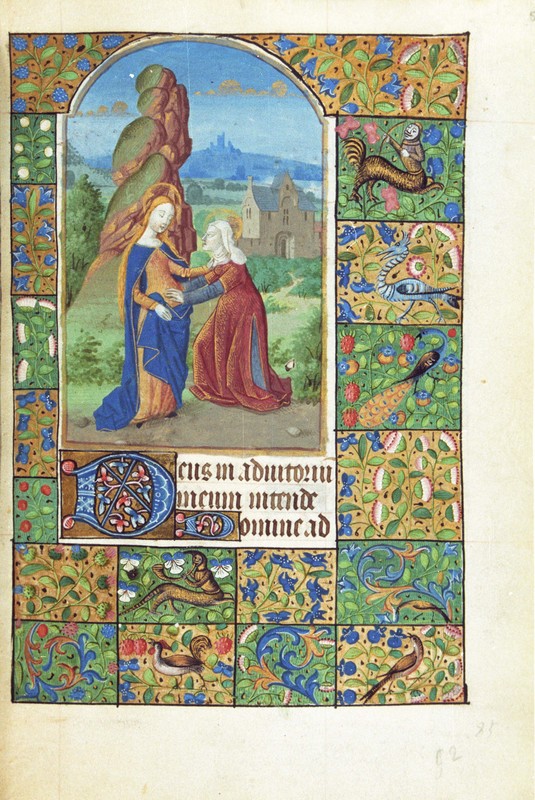 Lauds continues the theme of pairing the beginning of the reader’s day with the early phases of the Life of Christ.  The text of Lauds interweaves the story of Mary, pregnant with the Christ Child, with that of her cousin Elizabeth, who became pregnant with John the Baptist despite her advanced age.  The pregnant Mary traveled from Nazareth to the hill country to meet her cousin, who recognized the miraculous nature of Mary’s conception. In Lauds, the reader encounters Elizabeth’s greeting to her cousin, “Benedicta tu in mulieribus,” “Blessed art thou among women,” (Luke 1: 41-42) and also the canticle of Zacharias, the prophecy that John’s father spoke when he saw his son (Luke 1:68-79).  Lauds is nearly always illustrated by the Visitation, the meeting between the cousins.  The McVitty Master followed the usual pattern of silhouetting the two women against a landscape, with Mary a stationary figure and Elizabeth approaching her from the right.  Frequently the women gesture towards each other and often, as in Morgan MS M. 2, fol. 54r, and M. 231, 57r, Elizabeth touches Mary’s womb.  The Visitation is one of the most expressive miniatures in the McVitty Hours, with Mary’s face suggesting subtle emotion, and Elizabeth gazing intently at her young cousin.

The McVitty Master’s characteristic rock formation rises behind the Virgin in a way that both highlights her presence and extends the slight tilt of her head towards Elizabeth. And in this instance the marginal decoration seems in keeping with the theme of fertility in the main miniature, for the small compartments team with fruit and flowers and are more verdant than any of the other borders.