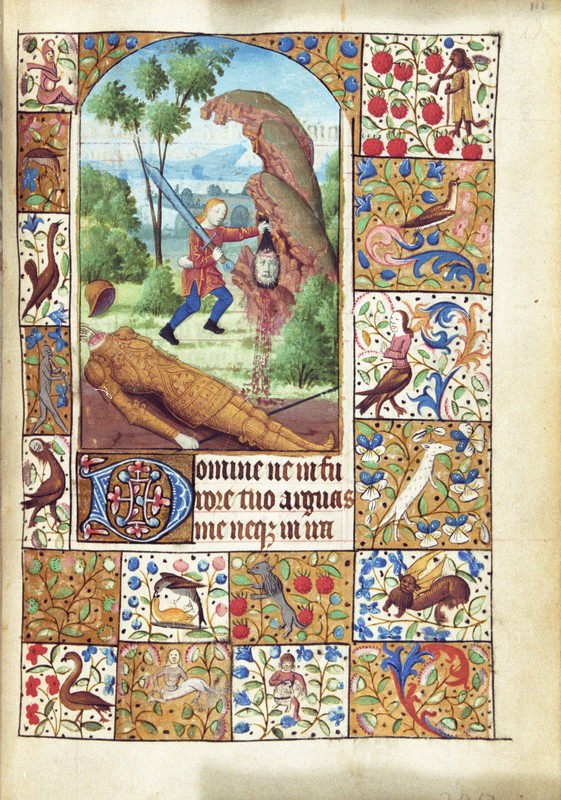 The Seven Penitential Psalms were a standard feature of the book of hours. These psalms were traditionally thought to have been written by King David in order to repent his numerous transgressions against God. They formed part of the Jewish liturgy and in the sixth century were grouped together by the learned Italian monk Cassiodorus as the psalms of penitence or confession. The owner of a book of hours would have used the Penitential Psalms to prayer for forgiveness, especially during Lent.  These psalms were believed to preemptively shorten time spent in purgatory. Sometimes the psalms were accompanied by scenes that seemed conducive to contrition, such as the Seven Deadly Sins, or scenes of David at prayer, as in Morgan MS M. 1093, fol. 79r.  But despite the repentant theme of the psalms, David’s victory over Goliath was a frequent choice to illustrate the Psalms, perhaps because the tale of David and Goliath would have been readily recognizable to a lay user of a book of hours.

Both the McVitty Hours and closely related Morgan MS M.2 (fol. 99r) focus on the conflict between the young David and the mighty giant, and both set the scene in an atmospheric landscape.  The miniatures focus on quite different moments in the narrative, however, for while the Morgan manuscript depicts David winding up to take a sling at Goliath, the Hollins book of hours depicts the bloody aftermath.  Center stage in the miniature is David, shouldering an enormous sword and clutching the head of the giant, which showers blood onto the ground. Goliath’s headless armor-clad corpse lies rigid on the barren ground, partly cut off by the frame of the miniature.  David’s face shows no more expression than we see elsewhere in the manuscript, but clearly the McVitty Master chose to the brutality of Goliath’s death.  The characteristic rock outcrop towers over David, emphasizing the small stature of the boy who had rescued his people.