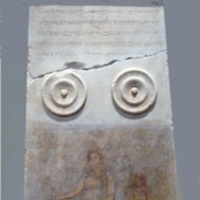 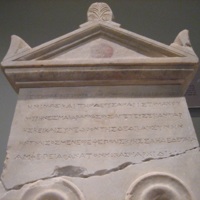 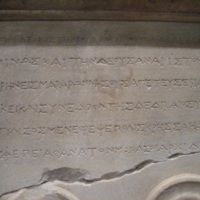 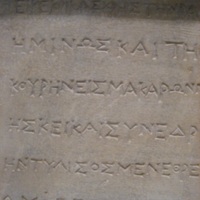 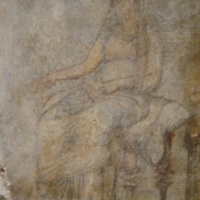 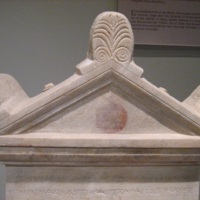 The grave marker is in the form of a pedimented stele with rosettes. The pediment survives with carved and painted details including acroteria carved in the form of palmettes and a painted pomegranate centered in the triangular space. Under the geison is inscribed a poetic epitaph in six line or three elegaic couplets. The deceased is identified as Aristodike, the daugher of Aristomachos whose family is well know and important in Pagasai. Other stelae indicate Aristodike has a brother Hygiamenes and a niece named Anthis. It is possible she is from a Cretan mercenary family. Under the inscription are two rosettes, marked out in paint. In the painted scene a woman is seated on a chair facing to the right and behind her a smaller figure, perhaps a child, stands with a worried pose. Archidike wears a chiton and himation and appears to be daydreaming; attendant looks grief stricken. There are some problems with body proportions and musculature, but the shading is masterful. The woman wears her himation over her head, as if married, but no husband is mentioned in the epitaph. Inscription is immediately under the geison.
εἰ κέκρικας χρηστὴν, Ῥαδάμανθυ, γυναῖκα καὶ ἄλλην/ ἢ Μίνως, καὶ τήνδε οὖσαν Ἀριστομάχου/ κούρην. εἰς Μακάρων Νήσους ἄγετ᾿! Εὐσεβίαν γὰρ/ ἤσκει καὶ σύνεδρον τῆσδε δικαιοσύνην. / Ἣν Τυλισὸς μὲν ἔθρεψε, πόλις Κρῆσσα ἥδε δὲ γαῖα/ ἀμφέπει ἀθάνατον - μοῖρα σοί, Ἀρχιδίκη!; If you have judged another woman as worthy, O Rhadamanthys, O Minos, then judge this woman, the daughter of Aristomachos, the same way, and lead her towards the Islands of the Blest! For she has made religious piety her practice and righteousness her own co-counselor. Tylissos, a Cretan city, nurtured her, but this land will surround her for eternity. Fate be with you, Archidike!