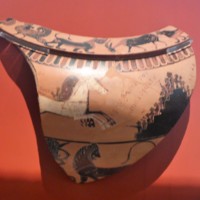 This fragment of Attic pottery dates back to the 6th-century workshop of Sophilos, who is one of the oldest Attic potters we can still call by name thanks to the artist signatures he wrote on his works. This reconstructed rim depicts a scene from the ending books of The Iliad.

According to myth, Achilles has, at this point, killed Hector and dragged his corpse around the city of Troy three times in vengeful retribution of the death of Patroklus, Achilles' beloved. Achilles has allowed neither Hector's nor Patroklus' body to go through proper funeral rites, wallowing in his ungodly rage and grief. Finally, Achilles is convinced to bury the body of Patroklus. After the burial, Achilles sets about hosting a spectacular set of funeral games in honor of his beloved Patroklus. Shortly afterward, Achilles also releases the body of Hektor back to Troy. The burying of the body of Patroklus, the funeral games, and the release of Hektor mark an end to Achilles mighty rage as well as an end to The Iliad.

This fragment of an ancient dinos (a mixing bowl for wine) depicts these very same funeral games to Patroklus. Along the upper rim a black figure rooster, lion, goat, and two other partial animals walk in either direction. Directly below this, a looping collar has been designed that alternates between red and black.

The main scene shows a four-horse chariot racing across towards a seated crowd of spectators. Behind the heads of the horses, we can still see an "ΟΣ" written. This was once the masculine singular nominative noun ending of the name of the racing chariot's driver.

The audience, done in the black figure and painted with red detail, sit on bleachers watching the horses. In the airspace before the audience, two lines are written almost as if to imply that the words were hanging in the air from their last cheer. "ΣΟΦ[Ι]ΛΟΣ:ΜΕΓΡΑ[ΠΣ]ΕΝ // ΠΑΤΡΟϘΛΥΣ:ΑΤΛΑ" slopes downwards across the bowl, written in a rather sloppy script. Some letters have been lost in the fragmentation of the bowl. Both lines are written in retrograde.

We can see the beginning of another crowd sitting on the backside of the bleachers facing the other direction. While we no longer have the part of the bowl showing what they were watching, we know it must've been something featuring Achilles because the name, "ΑΧΙΛΕΣ" also rises from the crowd.

Below all of these events, we can see the floor of the Earth held up on the decorative heads and tails of lions.

Translation: "Sophilos painted me. The funeral games of Patrokles. Achilles."