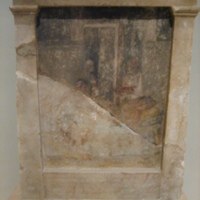 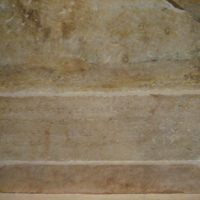 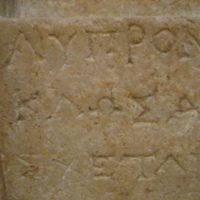 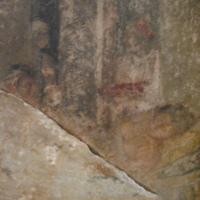 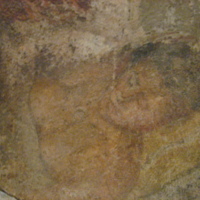 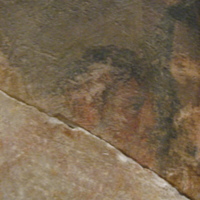 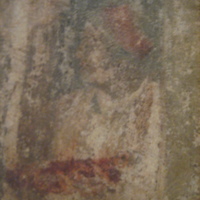 This grave marker for Hediste is in the form of a naiskos. Under the geison is a painted scene, underneath which is a 6 line inscription in ancient Greek. The grave monument is restored from two pieces found separately but clearly joining. The painted scene is remarkable for its color, sense of depth, and complex narrative. In the foreground, the painted scene displays a woman laid out on a decorative couch, with a man who is seated at her feet, looking at her closely. In the background, a complex, multi-dimensional architectural scene is depicted. A partition wall separates the couch from a back hallway in which an older woman stands, cradling the presumably dead infant in her arms. A door way leads from this space into an undefined area in which a younger girl, perhaps a household attendant, stands. This partition of space and illusion of receding domestic realms is unique among the extant painted stelai from Demetrias Pagasai. Unlike the other painted stelai, which are compositionally similar to their sculpted Classical counterparts from 5th and 4th century BCE Attica, the Hediste stele presents a narrative, rather than just an emblematic display of the deceased surrounded by family and friends.
Λυπρὸν ἐφ᾿ Ηδίστηι Μοῖραι τότε νῆμα ἀπ᾿ ἀτράκτων / κλῶσαν, ὅτε ὠδίνος νύμφη ἀπηντίασεν. / σχετλίη! οὐ γὰρ ἔμελλε τὸ νήπιον ἀνκαλιεῖσθαι, / μαστῶι τε ἀρδεύσειν χεῖλος ἑοῖο βρέφους. / ἕν γὰρ ἐσεῖδε φάος καὶ ἀπήγαγεν εἰς ἕνα τύμβον / τοὺς δισσούς, ἀκριτῶς τοῖσδε μολοῦσα, Τύχη. (transcription). The Fates spun out a painful thread from their spindles for Hediste, when she, as a bride, encountered childbirth. Oh enduring is she, not intended to embrace her child, nor even to water the lip of her own offspring with the breast. One light looked upon them both and Tyche led them both into a single tomb, coming upon them indistinguishably. (translation)