Hours of the Cross 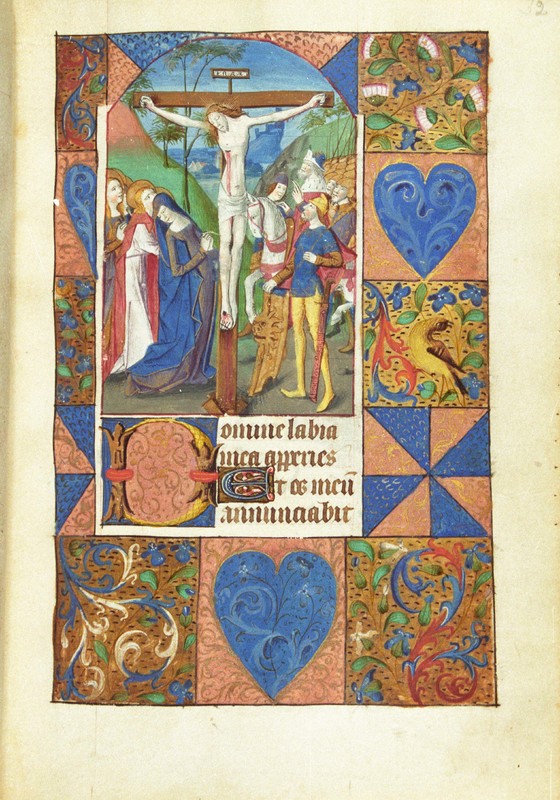 The Hours of the Cross, which typically followed the Hours of the Virgin, was a short Office intended to focus the reader’s devotions on the Passion of Christ, through hymns and responses that focused on his suffering on the Cross.  A depiction of the Crucifixion therefore usually introduces the Office.  In the McVitty Hours, the Crucifixion scene is a particularly detailed miniature, seemingly depicting more figures and activity than any of the others. Jesus is crucified at the center, flanked on his left by his followers and family and on the right by a Roman soldier who presides over his execution. Also visible are a number of accessory figures including a group of soldiers, and a figure on horseback. This is not only far more populated than other miniatures within the McVitty Book of Hours, but is also more complex, even, than Crucifixion scenes from relatively similar books of hours. One such manuscript, Morgan MS M.2, which is closely related in date and place of origin and bears significant stylistic similarities, contains (fol. 117v) a Crucifixion scene which makes the complexity of the McVitty Crucifixion apparent. In comparison, the Crucifixion scene in MS M.2 depicts only Christ on the cross surrounded by the Virgin Mary and the John the Evangelist, whereas the Crucifixion scene from the McVitty Book of Hours is so populated with figures and activity. This is not to say that the McVitty Crucifixion scene is entirely exceptional, merely that in comparison to others within the same manuscript and some of its contemporaries it is more detailed.

The border surrounding the miniature of the Crucifixion is one of the most striking examples of marginal illustrations found in the McVitty book of hours. While it employs many of the same colors as the other illustrations throughout the text, the quilt-like pattern and focus on larger shapes differs greatly from the rest of the illustrations in a way that could suggest a restoration or numerous illustrators. While the particular shade cornflower blue recalls other illustrations in the book, the lack of a similar red, prominent in other miniatures, and flatter colors lends itself to a striking difference. The borders surrounding this Crucifixion scene are also a great deal more geometric than the borders throughout the rest of the text. While other borders feature geometric patterns, such as the scenes of the Visitation and Adoration of the Magi, they shapes are meant to contain more organic floral patterns, whereas those in this scene contain bolder blocks of color. The difference in style between the Crucifixion and the other borders certainly complicates the question of authorship in the McVitty hours.