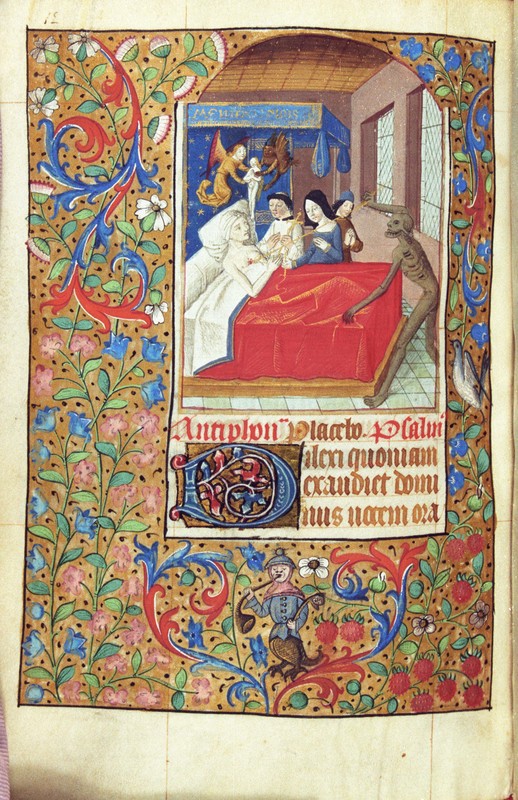 The Office of the Dead, usually found at the end of a book of hours, is a collection of psalms, prayers, and readings from the Old and New Testaments that were meant to coach the dying and the living family through death.  The Office of the Dead is not the funerary Mass, as the Office is not prayed during funerals. Instead the Office is used during the moments of death and the moments following to guide family members through the process of mourning.

The Office of the Dead contained the Hours of Vespers, Matins, and Lauds. The Hours of Vespers were meant to be prayed over the deceased’s coffin on the evening of the funeral Mass. Monks were hired by the family to recite or chant these prayers. Matins and Lauds were also prayed by hired monks on the morning of the funeral. Ideally the Office of the Dead was also prayed on a daily basis by the book’s owner. The daily recitations of these prayers provided the owner with comfort that her deceased relatives were being quickly prayed out of purgatory and into heaven. Most of the Office of the Dead consists of psalms intended to help one face death with a spirit of penitence and faith. Matins also contains nine lessons of readings from the Old Testament Book of Job that recount his suffering.

Often the Office of the Dead was illustrated with themes drawn from the Bible, such as the Last Judgment, the Raising of Lazarus, the Parable of Dives and Lazarus, or Job on the dung heap.   But the miniatures could also parallel the ars moriendi, The Art of Dying, a fifteenth-century manual that laid out the protocols and procedures for dying a good death.  Illustrations in this category are set in the world of book owner and offer a visual guide for an ideal death that ran from a deathbed supported by Last rites, through the funeral service and internment. Books of hours related to the McVitty Hours often fell into this category. Morgan MS M. 231, the work of the Chief Associate, offered a how-to that surrounded the main image of Last Rites with smaller vignettes that illustrated the sewing of the shroud, the funerary procession, and the burial. The Last Rites scene in the Hollins manuscript is likewise set in a well-appointed bed room where the dying person is attended by a priest and prayerful relatives.  In the McVitty Hours, a figure of Death, as a living corpse, pierces chest of the dying soul with a golden lance; this ghastly figure finds a parallel in the Office of the Dead in Morgan MS M.2.  What is remarkable about the McVitty Hours is how the figure who is dying is portrayed.  The figure is clearly awake, the most desirable state of affairs from a medieval perspective, and is also clearly a woman.  The figure’s gender is obvious both through its bare breasts, and through the long hair of the tiny soul being contended over by angel and demon.  The female identity of the dying subject is extremely rare.  The Princeton Index of Medieval Art offers only one parallel, in a mid-fifteenth-century French book of hours, the Coëtivy Hours, Chester Beatty Library, Dublin Castle, which is not stylistically related to the McVitty book of hours and in which the gender of the dying individual is less obvious than it in the McVitty Hours.  While scholars assume that many books of hours were intended for female possession and readership, it is exceptional to find such a clear statement of womens’ book ownership.